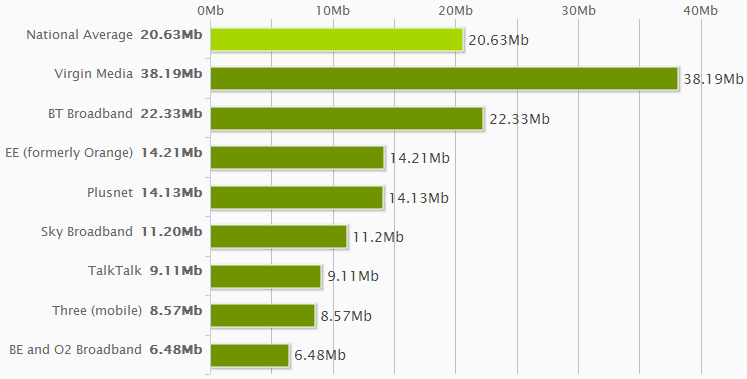 Virgin Media's average download speeds increased significantly over the previous month, rising by 4.94Mb, and they retain first place at the top of the speed table at 38.19Mb. Upload speeds were also up by 0.44Mb averaging at 4.14Mb.

Early last month Virgin launched their boost from up to 120Mb to 152Mb, from up to 60Mb to 100Mb and from up to 30Mb to 50Mb, which has undoubtedly contributed to their average download speed increases. While the boost was initially for new customers only, these average speed increases are set to continue as Virgin roll out the higher speeds to existing customers over the next year, with customers in several areas already enjoying the boost.

EE have taken third place, overtaking both Plusnet and Sky with average download speeds of 14.21Mb (an impressive 4.55Mb increase over last month).

EE have started traffic shaping to prioritise web and streaming traffic, allowing them to last month announce a new headline speed of up to 17Mb. At least 10% of their customers have to be able to achieve this speed in order for them to advertise it, making them faster than any other standard UK phoneline broadband supplier! We're currently running an exclusive £70 Amazon gift voucher offer with EE that stacks with their reduced price offers. It's a limited offer for this week only, so hurry to take advantage of it!

While Plusnet have dropped into fourth place, their average download speeds have actually improved by 1.47Mb, taking them to 14.13Mb. Similarly, Sky have dropped to fifth place, but have a 0.86Mbps increase in download speeds, averaging at 11.2Mb. As spring arrives with sunnier weekends and brighter evenings, we'll likely see further small increases across all providers as peak time congestion from video services reduces due to more people en. The availability of higher speed fibre services also continues to roll out to more exchanges.