EXPIRED: Watch the final season of Game of Thrones with a free 6 month Entertainment Pass from NOW Broadband 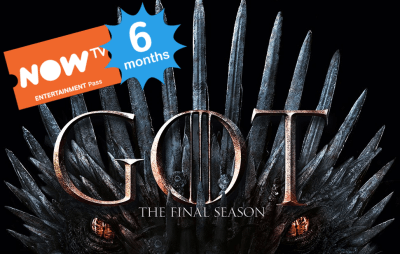 Whether you're a fan or not, it probably hasn't escaped your attention that the final season of Game of Thrones is coming to an end after 8 years on our screens. Starting this month, the must-see event television fantasy series will go out with a bang with 6 unmissable feature length episodes.

If you're yet to visit Westeros, or just want to refresh your memory of who's still standing, now's the time to catch up with previous seasons of the show! But what's the cheapest and easiest way to do that in the UK?

If you have Sky TV, you'll already know that the final season starts on Sky Atlantic on the 15th of April and you can watch the show from the start with the on demand Box Sets service. Looking to switch to Sky? Check out our Sky Broadband Buyers Guide here.

Don't have Sky, can't commit to a long contract or put off by the satellite dish? A NOW TV Entertainment Pass may be the answer for you. There's no contract, so you can cancel at any time and the pass only costs £7.99 a month. With that you can access over 300 box sets, including big name shows like Westworld, and of course seasons 1 to 7 of Game of Thrones, plus all the new episodes once they air.

If you're a massive diehard fan and you plan to stay up all night to watch the 2am HBO simulcast live on Sky Atlantic, NOW TV will let you do that too! Along with Sky Atlantic, you'll also get 10 other pay TV channels that include Sky One, FOX, Comedy central and ABC!

If you're also looking for a great broadband deal, then sign up for NOW Broadband, right now every one of their broadband deals comes with 6 months free NOW TV Entertainment Pass!

If this deal is tempting, then head on over to NOW Broadband and sign up for one of the packages below!