What are upload speeds and are they important? 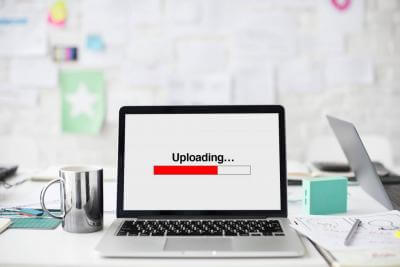 When you compare broadband deals you'll see that most providers sell their services based on how fast they are. When they do this they're almost always only talking about the download speed. That's fair enough - it is one of the two most important factors you need to consider, along with the price.

But there's another speed spec that providers don't shout about, and is often quite difficult to find anywhere. The upload speed.

So what exactly is this, and is it something you need to worry about? Let's take a look.

What exactly are upload speeds?

As you probably know, the download speed represents the speed at which data is transferred from the internet to your computer. Well, the upload speed is the opposite. It's how fast data moves from your computer to the network.

Broadband providers place all their emphasis on download speeds because the vast majority of the stuff you do online involves downloading. Everything from opening a simple web page to streaming 4K video on Netflix is affected by your download speed. By and large, the faster it is the better your experience will be.

But you're uploading all the time, too. Every time your computer communicates with a website or other online service it does so by uploading packets of data to those services. This is how it opens a web page or logs you in to your online bank account. However, the amount of data involved is so small that it's unaffacted by your upload speed. It all happens instantanesouly.

This means that your upload speed is irrelevant for day-to-day web use, which is just as well because it's usually a lot slower than your download speed. Broadband providers know that downloading is more important, so they configure their system to give that priority.

Where it does matter is when you're uploading large amounts of data. If you like to share your holiday photos and videos on Facebook, for instance, your upload speed will determine how quickly that will happen, and it can be a massive difference. Uploading one gigabyte of images would take around two and a half hours at a 1Mb speed, or just 14 minutes at 10Mb.

Or if you make video calls on Skype or FaceTime your upload speed dictates whether you can broadcast yourself in glorious high definition or will have to settle for a more low-res, pixellated image. Skype requires an upload speed of 1.5Mb for full HD.

So, what speed am I getting?

The easiest way to find out what upload speed you're getting is by using our Speed Test tool. You should then use this figure when you start to shop for a new broadband deal, because it's technically possible to switch to what looks like a similiar or better package, and end up with slower upload speeds in the process.

Most providers offer similar upload speeds, just as they do download speeds. For standard broadband with download speeds around 10-11Mb, uploads are usually around 1Mb. On an entry-level fibre deal - 36Mb download - it's around 9Mb, and is around 18Mb on the high-end fibre deal (typically 64-67Mb downloads). Providers that use different technolgies, such as Virgin Media or fibre to the home suppliers like Gigaclear, offer different speeds. But remember, they're always only average speeds, so you might get better or worse.

Here are the average upload speeds for the UK's biggest broadband providers:

Do I need to care about upload speeds?

Unless you're lucky enough to live somewhere covered by Gigaclear or Hyperoptic - and that's only around half a million homes between them - your upload speeds are typically going to be limited to between 1Mb and 30Mb (on average).

So how much weight should you give this when choosing a broadband deal? It depends on how you spend your time online. We've established it doesn't matter for normal web use - browsing, social media, streaming TV, or even if you use your broadband for gaming. But there are certain tasks where you'll definitely benefit from faster upload speeds. These include:

You might also want it if you work from home, especially if you work with large files or need to do video conferencing, etc. And a larger household with many users online together will also benefit from faster speeds.

For many, though, the upload speed is something that's good to know but not essential. In all cases the most important thing is to make sure you get the broadband speed you need based on how you use the internet.

Our broadband listings show the upload speed for all plans. If you're ready to start shopping for something faster, use our postcode checker to find the best broadband deals in your area now.