Out of contract broadband users to save £270 million a year 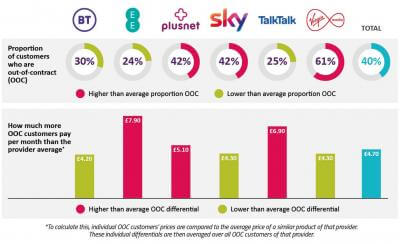 Coming to the end of your broadband contract? You could be set to take your share of a £270 million saving following a new agreement between Ofcom and some of the industry's biggest brands.

The deal will see EE, Plusnet and Sky join BT, TalkTalk and Virgin Media in cutting prices for vulnerable customers when their contract ends.

On top of that, EE, Plusnet, Sky, BT and TalkTalk have also all agreed to make New Customer pricing available to their existing users when they upgrade. It guarantees them access to the most attractive deals.

The changes will result in price cuts worth £270 million each year for the UK's nearly nine million out-of-contract customers, slashing the half a billion pound excess they normally pay.

The measures are the latest part of the industry watchdog's ongoing plan to ensure that everyone gets the best deal on their broadband by avoiding the often hefty price rises that follow when a user's initial contract period ends.

The benefits of signing a new deal or switching providers are well known. Yet as many as 40% of all users are still on an out-of-contract deal, paying an average of £56 a year more than they should be.

Ofcom found that Virgin Media have the highest proportion of out-of-contract users, at a massive 61%. Sky and Plusnet are also above average, with 42% still on old deals.

But EE's out-of-contract customers pay the most, at an average of £7.90 extra each month - or nearly £95 per year.

Research shows that older and vulnerable users are the least likely to switch, so they've been a large focus of Ofcom's campaign. Only last week they called on the industry to treat vulnerable people - including those with disabilities, health or financial problems - more fairly, to identify them more quickly, and to increase staff training.

Ofcom say that around a million vulnerable customers should save as much as £70 each per year as a result of these new rules.

Don't pay more than you need to

Other Ofcom rules came into force in February that require your broadband supplier to contact you when your deal ends. They now need to tell you how much you'll be paying if you remain on the same deal, compared to what you could pay if you took on a new contract. But you still need to act on it.

Even if you're happy with your current supplier, you shouldn't simply remain on your old deal. Do that, and the price will go up. If you're willing to sign a new contract with them you'll be able to get a much better price. You might even get other perks, too, like a new router, a speed guarantee, extra data on your mobile plan, and so on.

If you're open minded about switching, use our postcode checker to see what broadband deals are available in your area. Prices rise by as much as 50% when your contract ends, so you should be able to find a far better price than what you would pay if you did nothing.

Make sure you factor in the value of rewards like cashback. And remember that this is also your chance to bring several services together in a single bundle. Getting TV, mobile and landline calls from one provider will often bag you a better deal than if you get them all from different companies.

Sound like a plan? Then compare then best broadband deals now.