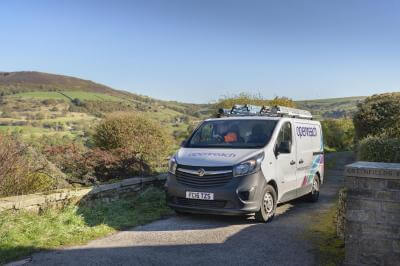 Millions of extra homes in rural regions are set to be upgraded to full fibre broadband over the next three years.

Openreach have unveiled plans to extend their gigabit-capable broadband network to a further 3.2 million properties across 251 market towns and villages.

It forms part of a £12 billion investment they've already committed to upgrade the network for another 20 million homes by the middle of the decade.

BT-owned Openreach provide the broadband infrastructure for most of the major broadband suppliers. The areas they're targetting in the latest announcement are in the so-called 'final third' of the country, the regions most at risk of being left behind as the UK moves towards faster broadband.

Many of these places still only have spotty internet coverage. The extra expense of installing new technology in more remote areas, coupled with a smaller population using it, makes them less cost effective for providers. Around 2% of UK properties are unable to access services of 10Mb.

The new locations are across the whole of Great Britain and Northern Ireland, from Penryn in Cornwall up to Thurso in the Scottish Highlands. You can find out if your town is on the list here.

Work is expected to get under way in the next 12-18 months.

Industry regulator Ofcom have proposed changes to their own rules to help make Openreach's plan financially viable. They will allow BT to recover their investment costs from their customers (the networks) through a wider range of services, including the new fibre services and the older copper ones.

Upgrading UK broadband was a major policy for the Conservatives in the last General Election. They pledged £5 billion towards the works - again with a focus on the less competitive regions - and wanter to deliver nationwide gigabit broadband within five years. This is likely to include 5G as well as fibre. The public money will come in addition to Openreach's investment.

Around 12% of properties throughout the UK currently have access to full fibre broadband, and the country ranks outside the top 30 for broadband speeds worldwide. While the promised upgrade was long overdue, it's potentially even more urgent now given the likely rise in the number of people who will be permanently working from home.

Good news, then, for rural communities. But it's still some way off. In the meantime, if you're out in the country and struggling with poor internet access, take a look at our rural broadband guide to find out what are your best options.