How internet use surged and workers became more productive during lockdown 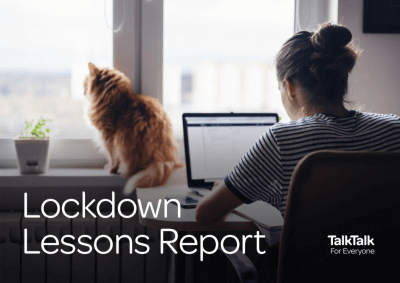 Internet usage surged by 40% during the lockdown this year, and working-from-home Brits became a whole lot more productive, according to a new survey.

The TalkTalk Lockdown Lessons Report looks at how we spent our time online during the lockdown. The survey gathered feedback in August from users and businesses, and analysed TalkTalk's own network usage patterns to discover the trends that emerged, and what changes it may lead to in the future.

The most unsurprising detail was that internet usage jumped by 40% during the lockdown period, compared to the same time a year ago. This is a large increase, even factoring in the usual year-on-year increase in data use.

The number hasn't dropped since restrictions eased, either, suggesting the change may be permanent. In fact, users ranked internet access as the second most important thing to have during a lockdown - behind only a garden or outdoor space.

So how were we spending all this extra time online?

For leisure use, video chat was the big winner. Some 44% spent time chatting with family and friends, and many of these would have been first time or reluctant users. More than a third said they were now a lot more confident using the technology.

It wasn't all fun and games. 58% of those who had started working from home felt they'd become more productive, and over half don't expect to ever return to the office full time. More than four in five identified a fast, reliable broadband connection as the most important thing to enable them to work away from the office.

Around a third of business leaders agreed that remote working had increased productivity among their teams. 40% said they'd made a contribution towards their employees' phone or broadband bills, and the same number had contributed up to £200 to improve their staff's home-working environment. A quarter invested in mental wellbeing apps.

And there's one more intriguing consequence of the lockdown: it has sparked a revolution in self-improvement.

Over half of all the people surveyed said that they'd learned new skills during the lockdown. 40% had looked up "how-to" videos, 19% had used learning apps, and an impressive 16% signed up to a full, online educational course. Languages, cooking, IT skills, gardening and yoga were the popular areas for learning.

Overall, a third developed a new skill, and the same number plan to continue learning into the future. Nearly a fifth of 18-24 years even felt their career prospects had improved. Younger people were also the driving force behind the trend for setting up an online side-hustle. One in ten said they'd pursued their own part-time business, like selling stuff or offering freelance services.

It remains to be seen what the digital legacy of lockdown will be. Many of the changes we've seen do seem to be an acceleration of trends that were already well underway. And if the results of this survey are anything to go by, changes in how we keep in touch with family, how we spend our leisure time, and how we work may well be here to stay.